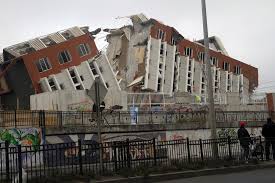 In terms of the Rule 29 of the Act bodies corporate are compelled to have the cover. All sectional title policy contracts underwritten by acknowledged sectional title underwriters include the cover as one of the basic perils of the policy.

2.  What is really understood by an earthquake in terms of insurance?

According to the US Geological Survey the definition of an earthquake is a shaking of the ground caused by the sudden breaking and movement of large sections of the earth’s rocky outermost crust. It is also known as a tremor (a minor quake) or temblor.  At some stage in the past insurers used a wording where earthquakes following mining operations were excluded and although this exclusion might still exist in some areas of industrial/commercial insurance, the exclusion does not apply to sectional title policies that we deal with.

3.  Are there any exclusions when it comes to earthquake related claims?

As long as the immediate cause of the damage is the earthquake then there are no exclusions applicable.

All insurance contracts contain certain general exclusions, such as wear and tear, gradual deterioration, defective construction, defective workmanship, etc.  Should one of these perils have been eminent before the earthquake, it could mean that the earthquake was simply the link in the chain which lead to the ultimate loss. This is known as the proximate cause which is defined as “the cause having the most significant impact in bringing about the loss and where two or more perils (in this case, the deficiency and the earthquake) operate at the same time to produce the loss.”

5.  Apart from the excluded perils mentioned, what other damage is regarded as most vulnerable to earthquake damage?

(i) buildings prone to landslides (on slopes),

All of these examples are equal to defective construction.

The technical matter of what is known earth faults (or fractures) is not discussed and has no implication on earthquake cover in terms of insurance.